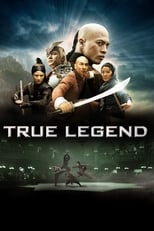 Release: Feb. 9th, 2010
Runtime: 1 hour, 55 minutes
Su Qi-Er, a wealthy man living during the Qing Dynasty who loses his fortune and reputation as a result of a conspiracy against him. After being forced out onto the streets, Su dedicates his life to martial arts and reemerges as a patriotic hero known as the "King of Beggars."

We didn't find any linked discussions for this film. Here are the results of a quick search of possibly related threads:
15 Goodbye to Television's Last True Late Night Legend
Traditional and true late night television has come to an end, as we say to goodbye to a legend. The last of the greatest talk show hosts signs off after over 3 decades of unforgettable moments on b...
0 True Story - Is it true..just what IS true?
True Story The title says it, or maybe not. Is it a true story when it’s relayed by a narcissistic sociopath? Even if he looks convincing? This movie tells the mainly correct story Mike Finkel (...

akatemple This is a really sad movie about revenge, Sus (Man Cheuk Chiu) son is kidnapped by his step brother Yuan, a very evil and dangerous fighter who has perfected the fighting style called Five Venom Fist.
READ REVIEW