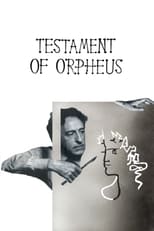 Release: Feb. 18th, 1960
Runtime: 1 hour, 20 minutes
Outside time and reality, the experiences of a poet. The judgement of the young poet by Heurtebise and the Princess, the Gypsies, the palace of Pallas Athena, the spear of the Goddess which pierces the poet's heart, the temptation of the Sphinx, the flight of Oedipus and the final Assumption. This film is the third part of Cocteau's Orphic Trilogy, which consists of The Blood of a Poet (1930), Orpheus (1950) and Testament of Orpheus (1960).

We didn't find any linked discussions for this film. Here are the results of a quick search of possibly related threads:
4 Old, Random, B&W All-Black Moses/Old Testament Movie
I have been searching for the answer to this one for a while. If anyone knows about it, I will be amazed and thankful. When my friends and I were in high school, we randomly found this movie on pu...
0 Orpheus and Eurydice meets Clint Eastwood?
Dear Everyone. This movie's on YouTube, seen it once, want my g/f to see it, can't recall its name. The hero drinks stuff to go to a wasteland on the way to Heaven, where there's one town run by a...