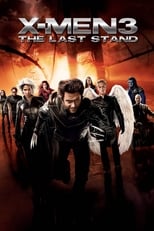 Release: May 24th, 2006
Runtime: 1 hour, 44 minutes
When a cure is found to treat mutations, lines are drawn amongst the X-Men—led by Professor Charles Xavier—and the Brotherhood, a band of powerful mutants organised under Xavier's former ally, Magneto.

25 How come X-men: The Last Stand is so unliked, compared to the others?
I actually think it's the best one, and has the best ideas in it for an X-men movie. SPOILER The idea that the humans invented a cure for mutation and whether or not mutants want the cure, rais...

Iroquois X-Men: The Last Stand may retain some fairly flashy effects work from its predecessors, but that's all pretty much cancelled out by a barrage of plot holes (without even counting the ones that have been caused as a result of subsequently released films interfering with the canon, such as that entire opening prologue) that are obvious even on a first viewing.
READ REVIEW

TheUsualSuspect Is it just me, or has one of the X-men character been getting the shaft over the last two X-men films.
READ REVIEW

PeterVincent The film introduces dozens of new characters such as Archangel (Ben Foster), who actually has something to do with the primary plot but ultimately disappears and reappears whenever the script requires them to.
READ REVIEW
View All (4)