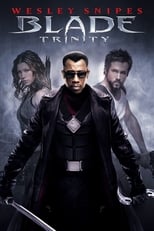 Release: Dec. 8th, 2004
Runtime: 2 hours, 3 minutes
For years, Blade has fought against the vampires in the cover of the night. But now, after falling into the crosshairs of the FBI, he is forced out into the daylight, where he is driven to join forces with a clan of human vampire hunters he never knew existed—The Nightstalkers. Together with Abigail and Hannibal, two deftly trained Nightstalkers, Blade follows a trail of blood to the ancient creature that is also hunting him—the original vampire, Dracula.

49 Blade Trinity
While not as exciting as the first two installments, Blade Trinity holds little to be expected. Directed by David S. Goyer, screenwriter for the first two films. Starring Wesley Snipes as Blade, Jes...
4 Blade Trinity
You can get info on this flick at UpcominghorrorMovies.com,Movies.Yahoo.com or the official site bladetrinity.com I personally think it will be awesome I am a fan of the original and sequel, plus ...
1 Blade: Trinity
Hey, has anyone seen the previews to Blade: Trinity? Looks alright doesn't it? Could turn out kinda bad tho, because it sounds a bit corny when Blade asks that new guy: Blade: ''What the hell do ...
36 Blade: Trinity
Jessica Biel, who stars in New Line Cinema's upcoming remake of The Texas Chainsaw Massacre, has signed to star in the studio's Blade: Trinity. The third part of the Blade trilogy. Biel will play A...
20 Blade: Trinity Trailer
I know it should be in it's thread, but it's so awesome....it deserves full attention! Here is the Blade:Trinity Trailer. Enjoy!!! ...