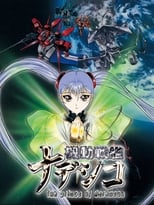 Release: Aug. 1st, 1998
Runtime: 1 hour, 27 minutes
Two years have passed since the Great War. Akito and Yurika have vanished. The Jovians and the Earthlings have joined forces and Ruri is now captain of Nadesico B. As the popularity of Boson Jumping grows, a vast transportation network has been developed. Dubbed the Hisago Plan, this network of Chulip portals holds the answers to the mysteries behind Bose particles and their power. If those secrets should fall into the wrong hands, it could mean...

0 Prince of Darkness possibly being made into a TV series
"John Carpenter is strongly hinting he’s about to turn his cult 1987 horror film Prince Of Darkness into a TV show. Following the box-office disappointment of Big Trouble In Little China, Carp...
49 September 11th, motion picture?
September 11th, motion picture? It’s been three years since the attacks on the World Trade Centres and the Pentagon… where thousands of lives were killed by acts of terrorism and an arr...
158 Original Motion Picture Score Tournament
Original Motion Picture Score Tournament 1. Songs are not accepted; ONLY music scores 2. The music scores selected must be ORIGINALLY made for a movie 3. Each player gets to nominate 8 music scores ...
5 Star Trek: The Motion Picture (1979)
Hello all, To my great surprise no one had reviewed this yet.... This movie is a hilarious in it's very own, harassing kind of way. The outfits are so exact products of their time and visual effects...
62 Mojo Filter's Top 15 80's Original Motion Picture Soundtracks
Visit and leave comments on my previous threads listing my... Top 50 Male Solo Artists Top 20 Female Solo Artists Top 50 Bands Top 30 Beatles Songs Top 40 Michael Jackson Songs Top 40 John Lennon Song...