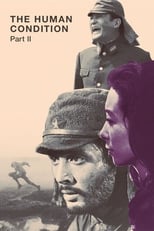 Release: Nov. 20th, 1959
Runtime: 2 hours, 58 minutes
Kaji is sent to the Japanese army labeled Red and is mistreated by the vets. Along his assignment, Kaji witnesses cruelties in the army and revolts against the abusive treatment against the recruit Obara. He also sees his friend Shinjô Ittôhei defecting to the Russian border, and he ends in the front to fight a lost battle against the Russian tanks division.

We didn't find any linked discussions for this film. Here are the results of a quick search of possibly related threads:
0 Best Films On The Human Condition???
About us, our relationships, society, motivations, truth, etc? And I'm not necessarily talking about those complex films, with no music, no dialogue for 45 minutes - give me a Western instead. Don't ...
0 Into Eternity
This looks pretty interesting. Set for general release round about now, it looks like it's taken quite an ethereal/reflective approach to the nuclear-waste 'hiding place' being built in Finland (sta...
29 More human than human is our motto
BLADE RUNNER - 1982 Is this to be an empathy test? Capillary dilation of the so-called blush response. . . fluctuation of the pupil . . . involuntary dilation of the iris? Greetings, I am D...
7 At Eternity's Gate (2018)
At Eternity's Gate (2018) Willem Dafoe’s Vincent Van Gogh was the performance of 2018. The film itself was modest in scope, almost boutique in feel, which, added t...
37 Condition of your dvds
I take really, really good care of my dvds and cds as well. I can't stand it when people leave discs lying around loose! They make me so mad I could bite the wings off the demons crawling from my ears...