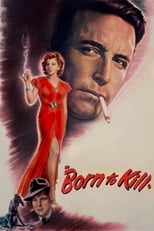 Release: Apr. 30th, 1947
Runtime: 1 hour, 32 minutes
Helen Brent has just received a Reno divorce. That night, she discovers her neighbor Laury Palmer and a gentleman caller murdered in Palmer's home. The killer is her neighbor's other boyfriend Sam Wilde, an insanely jealous man who won't abide anyone "cutting in" on him.

We didn't find any linked discussions for this film. Here are the results of a quick search of possibly related threads:
0 Question about the plot to Faster Pussycat, Kill! Kill! (1964)
After watching the movie, there are some parts of the plot I don't understand. View Spoilers WARNING: "spoilers" spoilers below Why did the leader of the women want hold the g...
62 Kill Bill, no Kill Tarantino
Ok, I get what Tarantino was trying to do, so I don't want to hear that as an argument for why I thought the film was horrible. I am tired of people going "Ohh, you didnt like Kill Bill??? Are yo...