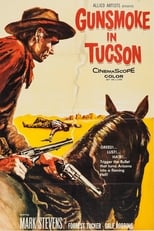 Release: Dec. 7th, 1958
Runtime: 1 hour, 20 minutes
As young boys, two brothers, Jed (AKA: Chip) and John, witness their father being hung by a vigilante gang. Chip, angry and bitter, grows up to be an outlaw and leader of the feared Blue Chip Gang. John goes the other way and becomes a U.S. Marshal. Two brothers on opposite sides of the law, destined to become embroiled in an Arizona range war between cattlemen and farmers.