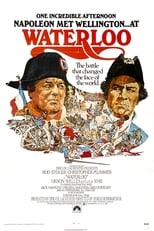 Release: Oct. 26th, 1970
Runtime: 2 hours, 8 minutes
After defeating France and imprisoning Napoleon on Elba, ending two decades of war, Europe is shocked to find Napoleon has escaped and has caused the French Army to defect from the King back to him. The best of the British generals, the Duke of Wellington, beat Napolean's best generals in Spain and Portugal, but now must beat Napoleon himself with an Anglo Allied army.

We didn't find any linked discussions for this film. Here are the results of a quick search of possibly related threads:
1 Waterloo 1970
Does anyone know if you can obtain an extended version, or if one exists? Have you seen it? Love the film but I read recently that the original cut was like 4 hours. Would love to see that version....

Rockatansky Quite frankly, I think the battle is thrilling enough on its own to make the movie worth seeing, but while I don't think the movie offers a lot of insight into Napoleon directly, I do think it holds plenty of interest when framed as the relationship Bondarchuk has with the figures and events in ques....
READ REVIEW