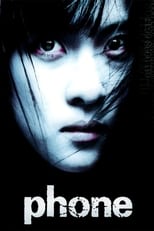 Release: Jul. 26th, 2002
Runtime: 1 hour, 40 minutes
Soon after Ji-won gets a new cell phone, her friend's young daughter, Yeong-ju, puts it to her ear and immediately begins screaming in terror. When other strange things start happening in connection with the phone, Ji-Won does some investigating and discovers that of the people before her who had the same number, almost all of them died suddenly under unusual circumstances. As Yeong-ju's behavior becomes increasingly alarming, Ji-won digs deeper...

We didn't find any linked discussions for this film. Here are the results of a quick search of possibly related threads:
4 Phone
I think Phone in my opinion was a good decent movie with some decent twists. This movie is inspired by the ring i found some editing problems in the story and some story problems. the movie talks ...

OG- That ghost can be thrown anywhere and it's pretty damn effective, especially if it isn't actually moving, which is the first (and what I found to be the second most effective freak out in the film) tension tester in the movie.
READ REVIEW