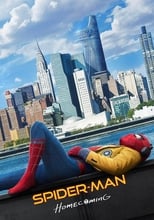 Release: Jul. 6th, 2017
Runtime: 2 hours, 13 minutes
Following the events of Captain America: Civil War, Peter Parker, with the help of his mentor Tony Stark, tries to balance his life as an ordinary high school student in Queens, New York City, with fighting crime as his superhero alter ego Spider-Man as a new threat, the Vulture, emerges.

3 Spider-man: Homecoming
I highly recommend this film. For me, it tops Spider-man 2 (no, not The Amazing Spider-man) Keaton is amazing, the character was well written and Keaton nails it Holland is great, I predict him port...
90 Spider-Man: Homecoming
Spider-Man is being rebooted again as we all know. Sony and Marvel buried the hatchet and Spidey is set to star, in part, in the next Avengers movie leading the way for him to become a full on membe...
54 Am I the only one who didn't like Spider-Man: Homecoming???
I just saw this on IMAX, and I wanted to like it so much, but I just couldn't... Checking on the reviews here and there, people seem to LOVE it. I ended up giving it a , and I knew I was being g...
1 Wonder Woman and Spider-Man: Homecoming.
Anybody excited for these films? Or at the very least, looking forward to them? I heard the DCEU's Wonder Woman movie is inspired by the very first Christopher Reeve Superman movie. And with Spider-Ma...

TheUsualSuspect One too many hot aunt May jokes and an unearned ending where Stark wraps everything nicely in a bow for him takes the film down a peg, but otherwise, this is an enjoyable superhero film.
READ REVIEW

DalekbusterScreen5 Then there's the 'Film by Peter Parker' towards the beginning of the film, presented as a home made movie by Peter filmed during the Civil War airport battle.
READ REVIEW

Gideon58 Peter is already aware of his powers at the beginning of this film, which saved the filmmakers a lot of time that they could devote to the conflict between Peter and a very three-dimensional villain...can't recall the last time I saw a film like this where the villain of the piece actually has a family.
READ REVIEW