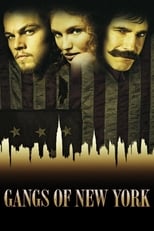 Release: Dec. 14th, 2002
Runtime: 2 hours, 47 minutes
It's 1863. America was born in the streets. Amsterdam Vallon returns to the Five Points of America to seek vengeance against the psychotic gangland kingpin, Bill the Butcher, who murdered his father years earlier. With an eager pickpocket by his side and a whole new army, Vallon fights his way to seek vengeance on the Butcher and restore peace in the area.

re93animator As one who is not bothered easily by violence on film, the fight scene at the beginning was one of most impressive film openings I've come across.
READ REVIEW

Cobpyth But after Bill punished Amsterdam, the film starts to drag a little, in my opinion, and becomes less stronger.
READ REVIEW