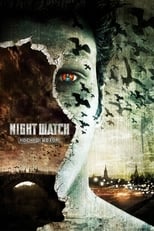 Release: Jun. 27th, 2004
Runtime: 1 hour, 54 minutes
Among normal humans live the "Others" possessing various supernatural powers. They are divided up into the forces of light and the forces of the dark, who signed a truce several centuries ago to end a devastating battle. Ever since, the forces of light govern the day while the night belongs to their dark opponents. In modern day Moscow the dark Others actually roam the night as vampires while a "Night Watch" of light forces, among them Anton...

6 Night Watch
Night Watch is a russian film that is being made into a triology, sounds a bit lik eUnderworld as there are warring factions fo vampires and a secret peace kept within the world. the triology in R...
15 The Night Watch
Spoilers of sorts will be below. If you'd like to read a bit without spoilers, scroll to the larger titled text section. Let me just start off with saying holy****ing****. "This is the Nig...
30 What Did You Watch on the Telly Last Night?
I thought for sure there was an ongoing, popular thread for this but I couldn't find one no where, no how! I just wanted a tab to see what people are watching because LAST night I watched a new episod...
40 Would you rather watch scary movies at night, or during the day?
Which is better for the night or day time to watch the horror/scary movies? My answer: I did watch horror movies only day time and scary movies at night. My example for list look like and you get ...
9 Night Watch and Day Watch
I just picked up these two movies in a boxset for Ł5, I havent seen these before or heard anything about them but ive checked the trailers and they seem like a very good watch. These are Russian...

TheUsualSuspect Night Watch is like the recently released film Push, and what I mean by that is that the makers of the film have created a world in which they write their own rules and we have no idea what we are in store for.
READ REVIEW