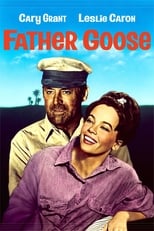 Release: Dec. 10th, 1964
Runtime: 1 hour, 58 minutes
During World War II, South Sea beachcomber Walter Eckland is persuaded to spy on planes passing over his island. He gets more than he bargained for as schoolteacher Catherine Frenau arrives on the run from the Japanese with her pupils in tow!

Gideon58 Grant was always known as being suave, urbane, and sophisticated onscreen, but Grant took a calculated risk here playing a character the polar opposite of his traditional onscreen image...Walter is unshaven, slovenly, crude, self-absorbed, and a bit of a sexist and having such a character interacting with a straight-laced teacher and a group of young girls produced comic gold.
READ REVIEW