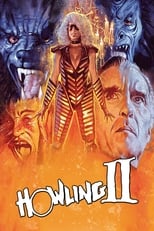 Release: Aug. 28th, 1985
Runtime: 1 hour, 31 minutes
After his sister is turned into a werewolf and subsequently killed, Ben White decides to help the enigmatic Stefan Crosscoe fight the growing population of lupine monsters, along with the lovely Jenny Templeton. Traveling to Transylvania, Ben, Jenny and Crosscoe attempt to hunt down the powerful werewolf queen, Stirba, and must face her furry followers, as well as other supernatural forces.

6 The Howling Reboot
Andy Muschietti announced at a recent Q&A forum that he will direct a reboot of the werewolf classic The Howling for Netflix after he completes work later this year on The Flash movie. I think kno...
38 Bitch Slap
CAST: Julia Voth Erin Cummings America Olivo Michael Hurst Ron Melendez William Gregory Lee Minae Noji Kevin Sorbo Dennis Keiffer Lucy Lawless Opening in theaters in 2009...
1502 The Resident Bitch's Movie Log
The Resident Bitch's Movie Log I had intended to wait to start this thread until after the first of the year, but what the hell. There's no time like the present, right? Right. So in this threa...
8 So what happened to Bitch Slap?
I remember last year that a film named Bitch Slap was coming out and it looked real good but I have heard nothing on it for a long time, does anyone know if it is still going to be released? Cheers ...
426 The Resident Bitch's New Top 100 Favorite Films
The Resident Bitch's New Top 100 Favorite Films Image courtesy of my loyal and willing slave, JayDee I've seen quite a few movies in the four years since my last top 100 and I think it's time ...