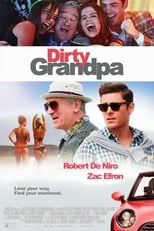 Release: Jan. 21st, 2016
Runtime: 1 hour, 42 minutes
Jason Kelly is one week away from marrying his boss's uber-controlling daughter, putting him on the fast track for a partnership at the law firm. However, when the straight-laced Jason is tricked into driving his foul-mouthed grandfather, Dick, to Daytona for spring break, his pending nuptials are suddenly in jeopardy. Between riotous frat parties, bar fights, and an epic night of karaoke, Dick is on a quest to live his life to the fullest and...

We didn't find any linked discussions for this film. Here are the results of a quick search of possibly related threads:
2 Bad Grandpa (2013)
Johnny Knoxville plays dirty 86-year old Irving Zisman, who begrudgingly drives his 8-year old grandson Billy across the country to live with his lowlife father. This plot is used to tie together a...
3 Grandpa Munster Al Lewis Dies at 95
wasn't a big fan of the show, but this is sad news 'Grandpa Munster' Al Lewis Dies at 95 NEW YORK - Al Lewis, the cigar-chomping patriarch of "The Munsters" whose work as a bas...
4 Cartoon Grandpa telling ghost stories
So the only other person I know who remembers this cartoon is my brother who also can’t remember the name and the remainder of the internet has failed me. It’s something we watched in the late 1980s/e...
0 Dirty War
This is a new documentry about the JSOC (joint special operations command). The movie is great, but should anyone be surprised that the USA has a special hit team who does not care whom they kill? The...

Gideon58 De Niro and Efron do have a funny supporting cast including Julianne Hough, in her most effective screenwork to date as Efron's bitchy fiancee, Jason Mantzoukas as a twisted drug dealer, Adam Pally as Efron's BFF and best of all, Aubrey Plaza as a bimbo who inexplicably spends the entire running tim....
READ REVIEW