One Nite in Mongkok 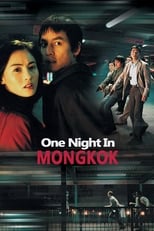 Release: May 10th, 2004
Runtime: 1 hour, 50 minutes
A gangster’s son is accidentally killed during a drunken dispute with a rival gang, and Officer Milo (Alex Fong)’s task force is assigned to the case. He soon learns that a hitman has been hired to take out the rival gang leader. While Milo and his crew desperately try to find and stop the hired gun, fearing all-out war in the streets, Lai Fu (Daniel Wu), a smart but inexperienced killer from a small town in the mainland, arrives in Hong Kong to...

0 one night in mongkok
when i 1st watched it i thought it was an okay movie but when i thought about what it was trying to portray it was quite good. You have different stories told in a Unlinear way in the beginning then i...
1 Nite Tales?
I saw this trailer for a movie hosted by Flaver Flav called Nite Tales on youtube. anyone know anything about it?...