House on the Edge of the Park 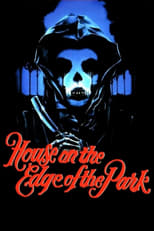 Release: Nov. 6th, 1980
Runtime: 1 hour, 31 minutes
Alex (David Hess) is a darkly sinister thug driving around New York City at night when he spots a young woman (Karoline Mardeck) driving alongside him. He follows the woman to a nearby park where he cuts her off, gets out of his car, and runs into hers where he throws her into the back seat and proceeds to savagely rape her before strangling her to death. He takes her locket as a trophy to another one of his many killings.

2 Killer stalks people in house. House alarm speaks when doors open.
Hello, I can't for the life of me remember this movie title. I recall watching it when I was younger and it scared me pretty bad. All I remember is there is a killer stalking people inside their ho...
3 Vincent Price film about a haunted house. Not House on the Hill.
Hi all. Years ago I saw a film on TV that I believe had Vincent Price in it about a haunted house. The scene I remember was of a skeleton coming down a staircase. I'm not sure if the house was real...
6 House Of Cards Becomes House Of Dominos
Some one on these forums mentioned that the outing of Harvey Weinstein is just the beginning. Boy, was he ever right. Subsequently, a number of celebrities and directors have been accused of sexual m...
20 Edge of Tomorrow
The first teaser released today, it looks good. ...
23 Edge of Tomorrow
The most entertaining movie I've seen in a while. I just saw Edge of Tomorrow, so I'm sorry if this review is a little bit late. But, I must say that this was one of the most fun times I've had...