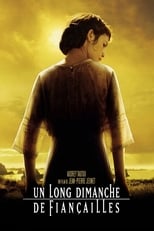 Release: Oct. 26th, 2004
Runtime: 2 hours, 13 minutes
In 1919, Mathilde was 19 years old. Two years earlier, her fiancé Manech left for the front at the Somme. Like millions of others he was "killed on the field of battle." It's written in black and white on the official notice. But Mathilde refuses to believe it. If Manech had died, she would know. She hangs on to her intuition as tightly as she would onto the last thread of hope linking her to her lover. A former sergeant tells her in vain that...

0 What do you think of A Very Long Engagement(2004)?
It was good overall, but I feel it could have been better. The ending kind of left me cold and felt it was anticlimatic. ENDSPOILER At the end, the main character finally finds her husband agai...

LordSlaytan What I like best about a Jean-Pierre Jeunet film is that he loves to tell his stories in colorful and imaginative ways that so many other popular directors are unable to achieve.
READ REVIEW