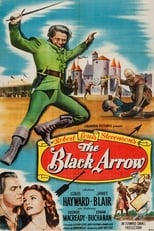 Release: Mar. 18th, 1948
Runtime: 1 hour, 16 minutes
A young British nobleman comes back from fighting in the War of the Roses to discover that his father has been murdered by an old family friend who is now an outlaw. However, he becomes suspicious about the exact circumstances of his father's death and determines to find out exactly what happened.

We didn't find any linked discussions for this film. Here are the results of a quick search of possibly related threads:
17 CW's The Arrow
The CW has released the first look at Stephen Amell as Oliver Queen (aka The Green Arrow) in their upcoming pilot "Arrow". After being marooned for five years on a remo...
6 Little arrow thingies
What are those little arrows (>>) before a user's name on the "Who's online" page?...
11 Broken Arrow (1996)
Broken Arrow is one of the few John Woo I have seen. I have no problem with him as such I have just not seen many. Broken Arrow for those who have never seen it is the story of two pilots, one of ...