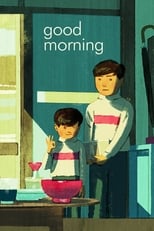 Release: May 12th, 1959
Runtime: 1 hour, 34 minutes
A lighthearted take on director Yasujiro Ozu’s perennial theme of the challenges of inter­generational relationships, Good Morning tells the story of two young boys who stop speaking in protest after their parents refuse to buy a television set. Ozu weaves a wealth of subtle gags through a family portrait as rich as those of his dramatic films, mocking the foibles of the adult world through the eyes of his child protagonists. Shot in stunning...

We didn't find any linked discussions for this film. Here are the results of a quick search of possibly related threads:
11 Good Morning, MoFo
GOOD MORNING!...
3 Good Morning, Dave
Good Morning, Dave. Have you been doing some more drawings? May I see them? . . . That's a very nice rendering, Dave. I think you have improved a great deal. Would you like to see visuals I have ex...
20 The Morning Show
Fans of the HBO series The Newsroom will have a head start with this original apple series that was recently nominated for three Golden Globes. Just watched the pilot for this smart and, of cou...

donniedarko Despite being an immature comedy with most the humor based off farts- which was rather funny- Ozu creates an important simple statement on communications and understanding.
READ REVIEW