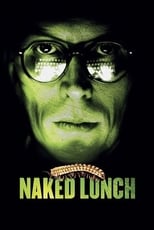 Release: Dec. 27th, 1991
Runtime: 1 hour, 55 minutes
Blank-faced bug killer Bill Lee and his dead-eyed wife, Joan, like to get high on Bill's pest poisons while lounging with Beat poet pals. After meeting the devilish Dr. Benway, Bill gets a drug made from a centipede. Upon indulging, he accidentally kills Joan, takes orders from his typewriter-turned-cockroach, ends up in a constantly mutating Mediterranean city and learns that his hip friends have published his work -- which he doesn't remember writing.

4 just watched naked lunch... what the f**k?
I just watched the 1991 David Cronenberg film "Naked Lunch". I don't know why I picked it up at the video store, just thought it might be something different. I had never heard of it before...
19 Places I'll Be This Year (if you wanna have lunch)
So, you all know I go to Seattle around Labor Day each year. I assume anyone able and willing to meet me there already has, though if you've changed your mind or you're new or just missed it the last ...

Citizen Rules But thanks to an overly wacky script written by David Cronenberg, we get a story that waste the talents of Peter Weller by going way over the top to zaniness.
READ REVIEW

Joel Peter Weller's performance is the funniest thing about the film.
READ REVIEW

TheUsualSuspect Naked Lunch is exactly what you would expect from the weird mind of Cronenberg who brought us such films like Videodrome and The Fly.
READ REVIEW