Philosophy of a Knife 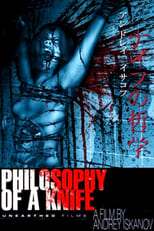 Release: Jan. 1st, 2008
Runtime: 4 hours, 9 minutes
The true history of Japanese Unit 731, from its beginnings in the 1930s to its demise in 1945, and the subsequent trials in Khabarovsk, USSR, of many of the Japanese doctors from Unit 731. The facts are told, and previously unknown evidence is revealed by an eyewitness to these events, former doctor and military translator, Anatoly Protasov.