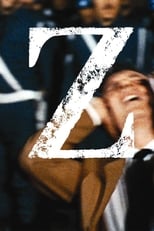 Release: Feb. 26th, 1969
Runtime: 2 hours, 7 minutes
Repression is the rule of the day in this film that skewers Greek governance of the 1960s. Z, a leftist rabble rouser, is killed in what appears to be a traffic accident. But given the political climate, the death of such a prominent activist raises troubling questions. Though it's too late to save Z's life, a postmortem examination suggests that the ruling party was behind his death. As the facts leak out, those who tell the truth pay the price...

mark f But I will say that Z won Oscars for Best Foreign Language Film and Best Editing and that it was also nominated for Best Film, Best Director and Best Adapted Screenplay.
READ REVIEW