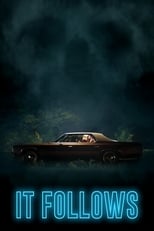 Release: Feb. 4th, 2015
Runtime: 1 hour, 40 minutes
After carefree teenager Jay sleeps with her new boyfriend, Hugh, for the first time, she learns that she is the latest recipient of a fatal curse that is passed from victim to victim via sexual intercourse. Death, Jay learns, will creep inexorably toward her as either a friend or a stranger. Jay's friends don't believe her seemingly paranoid ravings, until they too begin to see the phantom assassins and band together to help her flee or defend herself.

CiCi The direction is just as on par with the writing as well, he manages to generate consistently good performances from a hugely inexperienced cast, yet he also manages to create and sustain a sense of fear and anticipation for the duration of the film, mostly from only slightly odd things, for example....
READ REVIEW

TheUsualSuspect In the end, I wanted to like this film a lot more than I did, but suffice to say it is still a good horror flick and easily recommended.
READ REVIEW

The Gunslinger45 A film in limited release advertised as a horror film that was described on Rotten Tomatoes as a nightmare journey.
READ REVIEW
View All (8)