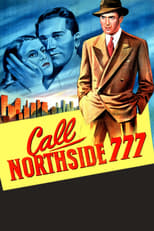 Release: Feb. 13th, 1948
Runtime: 1 hour, 51 minutes
In 1932, a cop is killed and Frank Wiecek sentenced to life. Eleven years later, a newspaper ad by Frank's mother leads Chicago reporter P.J. O'Neal to look into the case. For some time, O'Neal continues to believe Frank guilty. But when he starts to change his mind, he meets increased resistance from authorities unwilling to be proved wrong.

We didn't find any linked discussions for this film. Here are the results of a quick search of possibly related threads:
0 Call Northside 777 (1948)
5/5 A stunningly well-made docudrama that was undeniably far ahead of its time. One of Stewart's best performances, and a huge milestone of its time. Consistently gripping and believable, it disrega...
5 most amazing quote- call me romantic, call me single...
orson welles at his best; intense and handsome..........."let us sit here in peace, eventhough we shall be destined never to sit here again...sometimes i have a queer feeling with regard to you j...