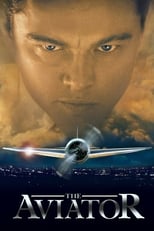 Release: Dec. 17th, 2004
Runtime: 2 hours, 50 minutes
A biopic depicting the life of filmmaker and aviation pioneer Howard Hughes from 1927 to 1947, during which time he became a successful film producer and an aviation magnate, while simultaneously growing more unstable due to severe obsessive-compulsive disorder.

0 The Aviator
Just read up on Scorsese's latest movie about the life of Howard Hughes, and I must say I cannot wait to see this. Just the actors involved is awesome: Leonardo DiCaprio, Alan Alda, Cate Blanchett, Wi...
37 The Aviator (d. Martin Scorsese, 2004)
"Ladies and Gentlemen; Howard Hughes." Yes, that's right: the trailer's now ONLINE. It doesn't really look like a Scorsese picture though, does it?...
24 Thoughts on the aviator and gangs of new york
What do you guys think about these movies. I feel like they did not age well. Movies which often are made through text book research and step by step events often tend to be tedious. Gangs of new yor...

JayDee Film Trivia Snippets - There's an interesting link between this film and the 1980 film, Melvin and Howard.
READ REVIEW

cricket Going into it this time, one thing that piqued my interest was how they portrayed the filming of Hell's Angels, a good movie I just watched a couple of years ago.
READ REVIEW

TheUsualSuspect Not the best film of the year, but deserving of recognition.
READ REVIEW
View All (7)