The deadline for the Top Films of the 2000s list is days away! Submit your ballot now, or read about it here
← Back to Movies

The Curse of the Wraydons 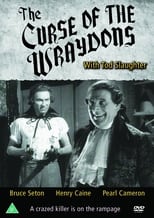 Release: Dec. 16th, 1946
Runtime: 1 hour, 40 minutes
Tod Slaughter goes about the countryside strangling everybody. His evil scheme is to destroy the family who wronged him. He secret lab is complete with a torture chamber, featured in the films climax. Probably the most maniacal portrayal Tod ever gave.

We didn't find any linked discussions for this film. Here are the results of a quick search of possibly related threads:
5 Curse of the Jade Scorpion
So, I went to see The Curse of the Jade Scorpion this afternoon at the relatively new UA cinema on MacArthur and LBJ in Valley Ranch (just down the road from the Dallas Cowboys' practice facility), an...
2 Poltergeist: Curse or Coincidence
Recently on E! Entertainment Network , their latest installment of E! True Hollywood Story was of Poltergeist . After seeing it, I now have mixed thoughts of the whole Carol Anne situati...
9 The Curse Of Expositional Dialogue
Dialogue is a very important part of film. It is used to give us important information about the characters and elements of the story. The average viewer's expectation of dialogue is for it to be prop...
5 The Star Wars Curse
Ford broke his leg a few months back... then last week was involved in a plane crash... Carrie described Ford's injuries as "worse than they let on". Fisher herself was involved in a minor...
2 The Librarian: The Curse of the Judas Chalice
A third Librarian film is on the rise, and Noah Wyle is returning. However, I did hear that this one is going to be released in theaters. Is there any truth behind this? Trailer I honestly haven't s...