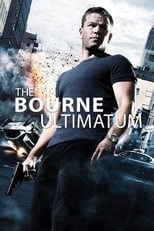 Release: Aug. 3rd, 2007
Runtime: 1 hour, 55 minutes
Bourne is brought out of hiding once again by reporter Simon Ross who is trying to unveil Operation Blackbriar, an upgrade to Project Treadstone, in a series of newspaper columns. Information from the reporter stirs a new set of memories, and Bourne must finally uncover his dark past while dodging The Company's best efforts to eradicate him.

We didn't find any linked discussions for this film. Here are the results of a quick search of possibly related threads:
8 The Bourne Ultimatum
Damon Talks Ultimatum Back as Bourne. August 25, 2004 - The Moviehole website recently sat down with Matt Damon to discuss his forthcoming projects, including the third film in the increasingly p...
27 The Bourne Ultimatum
Saw this one yesterday, and posted this review of The Bourne Ultimatum in the reviews area: The Bourne Ultimatum In recent years, Hollywood has caught onto the idea that gritt...
13 ultimatum
if will.15 doesn't post in this thread in the next 72 hr, i will deactivate my account and never come back. yes, you heard correctly. i will leave the forums for good. just like that i will stop sha...
0 Borne ultimatum
does anybody know where i can find out the fighting style they used in the borne series?...

Iroquois Even after being extremely unimpressed by The Bourne Supremacy, I still had some high expectations for this film, which was supposedly the best in the series (or at least it was good enough to end up on the IMDb Top 250 - while I know the Top 250 is not to be trusted, I figured that should be enough....
READ REVIEW

pahaK A direct continuation to previous film The Bourne Ultimatum does maintain very much the same style as its predecessor.
READ REVIEW

The Prestige Anyways, I can't close this post without saying that this film featured some of the most outstanding action scenes i've ever seen - in my life.
READ REVIEW
View All (5)