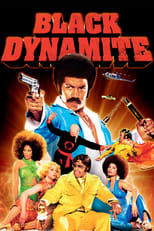 Release: Oct. 16th, 2009
Runtime: 1 hour, 30 minutes
This is the story of 1970s African-American action legend Black Dynamite. The Man killed his brother, pumped heroin into local orphanages, and flooded the ghetto with adulterated malt liquor. Black Dynamite was the one hero willing to fight The Man all the way from the blood-soaked city streets to the hallowed halls of the Honky House...

11 Black Dynamite
Plot This is the story of 1970s African-American action legend Black Dynamite. The Man killed his brother... Cast Michael Jai White Salli Richardson Kym Whitley Roger Yuan Kevin Chapman Lauren Kim ...
9 Black Dynamite
Anybody seen the trailer for this Blackploitation spoof? Looks hysterical and brilliantly observed. ...
4 Black Dynamite 2
Michael Jai White is bringing back his 2009 Blaxploitation hero Black Dynamite to screens again after the film became a successful Adult Swim cartoon from 2011-2015. The film will be made under Jai ...
13 Black Dynamite
Figure this deserved its own thread. I caught this on the festival circuit last month and think it's definitely a contender for the funniest movie I've seen all year, if not an outright winner. An o...
1 The Black Dynamite/Argo connection
About 20 minutes into Argo, John Goodman and Ben Affleck are talking in a bar about finding a producer for the fake movie. In the background, there is a song playing. That song opened up the film Blac...

Iroquois Even so, Black Dynamite is a fine example of how to do a genre parody, especially since it attempts to recreate the objectively terrible nature of a lot of low-rent blaxploitation films (the obvious point of reference being Dolemite more so than Shaft).
READ REVIEW

Okay It has the most heart of any film from that genre, and it's also extremely witty, mainly due to the clever writing that immensely helped at realising numerous quotable scenes.Michael Jai White steals the show just by his presence alone, he is perfect for the role of Black Dynamite, his character has....
READ REVIEW