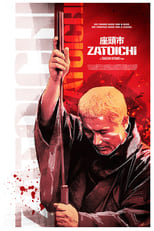 Release: Sep. 6th, 2003
Runtime: 1 hour, 51 minutes
Zatoichi is a 19th century blind nomad who makes his living as a gambler and masseur. However, behind this humble facade, he is a master swordsman gifted with a lightning-fast draw and breathtaking precision. While wandering, Zatoichi discovers a remote mountain village at the mercy of Ginzo, a ruthless gang-leader. Ginzo disposes of anyone who gets in his way, especially after hiring the mighty samurai ronin, Hattori, as a bodyguard. After a...

meatwadsprite Many different characters take their turns being developed and studied - which I feel here takes away from the emotional power of the film , but still is entertaining in another way.
READ REVIEW