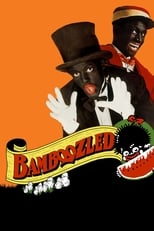 Release: Oct. 6th, 2000
Runtime: 2 hours, 15 minutes
TV producer Pierre Delacroix becomes frustrated when network brass reject his sitcom idea. Hoping to get fired, Delacroix pitches the worst idea he can think of: a 21st century minstrel show. The network not only airs it, but it becomes a smash hit.

We didn't find any linked discussions for this film. Here are the results of a quick search of possibly related threads:
3 Puzzled by Bamboozled
Just saw Spike Lee's new film, Bamboozled. I have a disagreement with a friend about a couple of plot points, and hope someone here can help. Near the beginning of the film, there's a scene between...

The Gunslinger45 The audience loves the show, it becomes a hit, and it even gets to the point when live audience members begin to show up in Black face themselves.
READ REVIEW