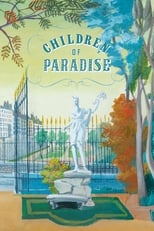 Release: Mar. 15th, 1945
Runtime: 3 hours, 11 minutes
Filmed during the German occupation, this French milestone centers around the theatrical life of a beautiful courtesan and the four men who love her. Voted the “Best French Film in History” by the French Film Academy in 1990.

We didn't find any linked discussions for this film. Here are the results of a quick search of possibly related threads:
0 Paradise Lost
I saw Paradise Lost last night in London! It's finally out in the UK. Nerve-jangling stuff! The lost young backpackers storyline works and the production values seem to be way up on other films...
5 TROUBLE IN PARADISE
Ernst Lubitsch's 1932 crime comedy "Trouble In Paradise" (with Herbert Marshall, Kay Francis, and Miriam Hopkins) is one of the greatest film comedies ever made anywhere, arguably the greate...
0 1974 - Phantom Of The Paradise
Phantom Of The Paradise 1974 (Rocky Horror Picture Show Meets Phantom Of The Opera) Starring William Finley as Winslow/The Phantom & Paul Williams as Swan Introducing Jessica Harper as Phoenix...
3 Eden: Paradise Lost
Darn it, this U.K. reality show sounds good, but I cannot stream it here in America. Did anyone here watch it? ...
2029 Survivor 2: Paradise Island
While survivor 1 is nearing its end, it is time to start the groundwork for survivor 2. Godoggo has done a great job with survivor 1 and I hope to do the same here. I am looking for 17 contestants...