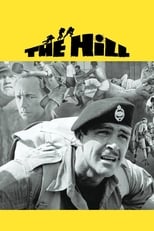 Release: Jun. 17th, 1965
Runtime: 2 hours, 3 minutes
North Africa, World War II. British soldiers on the brink of collapse push beyond endurance to struggle up a brutal incline. It's not a military objective. It's The Hill, a manmade instrument of torture, a tower of sand seared by a white-hot sun. And the troops' tormentors are not the enemy, but their own comrades-at-arms.

Iroquois The Hill deserves credit not just for its stark depiction of a World War II stockade and its inhabitants, but also because of a narrative that still seems to subvert a lot of typical prison/war tropes even in a film from 1965.
READ REVIEW