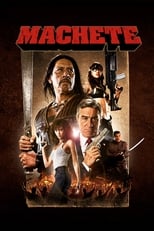 Release: Sep. 1st, 2010
Runtime: 1 hour, 45 minutes
After being set-up and betrayed by the man who hired him to assassinate a Texas Senator, an ex-Federale launches a brutal rampage of revenge against his former boss.

4 Machete Kills (Sequel to Machete)
'Machete Kills' Script Already Completed Originally Posted by bloody-disgusting A Machete sequel has already been written, according to the film's leading m...
23 Machete
Machete An Ex-Federale named Machete (Danny Trejo) is hired to assassinate a US Senator (Jeff Fahey), but he is double-crossed. Left for dead, he comes back for vengeance with the help of his brothe...
24 Machete
Machete2010 Cast: Danny Trejo, Jessica Alba, Robert de Niro, Steven Seagal, Michelle Rodriquez, Jeff Fahey. Director/Writer: Robert Rodriquez. I've been waiting for this movie since i heard the fake...
5 Machete Man from Grindhouse
Do you think they will really make this film? It's sort of reminds me of a Charles Bronson film, Mr. Majestic. Looks like they are truly making it! Cool! I have loved Danny Trejo since I first ...
25 Machete Kills
Its a sequel to the 2010 film Machete and is expecte to come out in 2013 From Aldamisa Productions*: “ The second film in the Machete trilogy finds Machete mourning the loss of his beloved Sar...

TheUsualSuspect Machete is something that could have been great fun, but it leaves most of the fun in 2007 with Grindhouse.
READ REVIEW

MovieMad16 Never the less , Fun Film and good action gives this a thumbs up.
READ REVIEW

Gideon58 As part of that film, Rodriguez mounted a trailer for an imaginary film to be shown between the two features called Machete starring Danny Trejo.
READ REVIEW