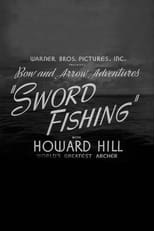 Release: Oct. 21st, 1939
Runtime: 10 minutes
Sword Fishing is a 1939 short documentary film about a group of fisherman, including Howard Hill, "the world's greatest archer," who go in search of marlin off the California coast. With fishing line attached to his arrow, Hill plans to spear the fish, which would then be brought aboard the boat by rod and reel. In 1940, the film was nominated for an Academy Award for Best Live Action Short Film, One-Reel at the 12th Academy Awards.

We didn't find any linked discussions for this film. Here are the results of a quick search of possibly related threads:
5 Salmon Fishing in the Yemen
Salmon Fishing In The Yemen Salmon Fishing In The Yemen is a story of a fisheries expert, Dr Alfred Jones (Ewan McGregor), who is persuaded by Harriet Chetwode-Talbot (Emily Blunt) among others t...
9 Fishing Movie Scenes
Hello, Can anybody think of movies/scenes about a recreational single fisherman? No river's more sea and lakes and preferably if we can see no land in shot even better. Thanks!...
1 Help finding a film involving a fishing hook death
Many years ago I saw a film that to this day I cannot find again. I'm positive I have enough information now to track it down but I need some help. Firstly, I made a post on Reddit but am not recei...
0 Fishing without Nets 2014 : WARNING SPOILER ALERT
So at the end of the movie I take it that he is lost in the middle of the Ocean and won't be able to find his way back to shore. Is this correct ?...
0 Sword of Vengeance
Sword of Vengeance 2015 Jim Weedon "Tell your father the Gods can no longer wait." Don't you like slow-motion scenes during bloody fights with a sword such as in "300"? You thor...