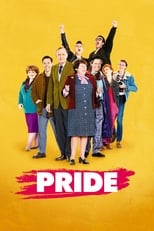 Release: Sep. 12th, 2014
Runtime: 1 hour, 57 minutes
Set in the summer of 1984 – Margaret Thatcher is in power and the National Union of Mineworkers (NUM) is on strike. At the Gay Pride March in London, a group of gay and lesbian activists decides to raise money to support the families of the striking miners. But there is a problem. The Union seems embarrassed to receive their support.

Citizen Rules It was all so: quick, fast and loud...and then the scene is over and the next one starts...In that way it reminded me of the sci fi indy film Coherence (2013) feeling like a movie where everything starts and ends in the middle.
READ REVIEW