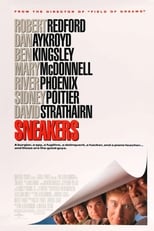 Release: Sep. 9th, 1992
Runtime: 2 hours, 6 minutes
When shadowy U.S. intelligence agents blackmail a reformed computer hacker and his eccentric team of security experts into stealing a code-breaking 'black box' from a Soviet-funded genius, they uncover a bigger conspiracy. Now, he and his 'sneakers' must save themselves and the world economy by retrieving the box from their blackmailers.

We didn't find any linked discussions for this film. Here are the results of a quick search of possibly related threads:
15 Sneakers a Phil Alden Robinson film
I my not be the biggest Redford Fan out there, but when a role comes along like this it's the perfect fit for him. timing was great and this role for Redford couldn't have come at a better time in his...