Barry White - The Man And His Music 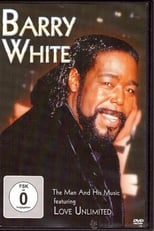 6 R.I.P.- Barry White
Velvet-voiced R&B crooner Barry White, whose lush baritone and throbbing musical compositions oozed sex appeal on songs like "Can't Get Enough of Your Love, Babe,'' has died. He was 58. ...
2 R.I.P Barry White
Legendary soul singer Barry White has died in Los Angeles at the age of 58, after a long illness. He died at Cedars Sinai Hospital in West Hollywood on Friday morning, his manager Ned Shankman s...