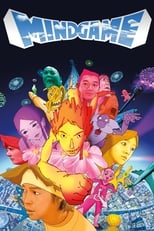 Release: Aug. 7th, 2004
Runtime: 1 hour, 43 minutes
The film follows Nishi, a loser who has a crush on his childhood girlfriend. After an encounter with the Japanese mafia, the film follows Nishi as he journeys to heaven and back, and ends up trapped in an even more unlikely place.

10 Movies about smart woman who trick or play mind game with men?
I like the last seduction...is there any movie like that? I prefer 2005 release and newer though...