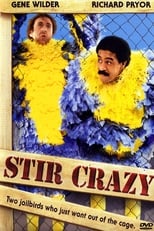 Release: Dec. 12th, 1980
Runtime: 1 hour, 51 minutes
New Yorkers, Skip Donahue and Harry Monroe have no jobs and no prospects, so they decide to flee the city and find work elsewhere, landing jobs wearing woodpecker costumes to promote the opening of a bank. When their feathery costumes are stolen and used in a bank robbery, they no longer have to worry about employment—they're sent to prison.

mattiasflgrtll6 Skip and Harry's personality differences contrast in really funny ways where Skip is forced to take every beating with a smile on his face but suffers in agony whenever the deputy Ward Wilson is out of sight...
READ REVIEW

Gideon58 They are BFF's who have been both fired from their jobs and leave town for a fresh start and end up getting arrested for a crime they didn't commit and end up being sent to a prison work farm where their struggle to survive prison life is interrupted by a prison rodeo run by a pair of crooked warden....
READ REVIEW