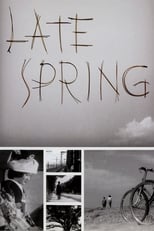 Release: Sep. 13th, 1949
Runtime: 1 hour, 50 minutes
Noriko is perfectly happy living at home with her widowed father, Shukichi, and has no plans to marry -- that is, until her aunt Masa convinces Shukichi that unless he marries off his 27-year-old daughter soon, she will likely remain alone for the rest of her life. When Noriko resists Masa's matchmaking, Shukichi is forced to deceive his daughter and sacrifice his own happiness to do what he believes is right.

We didn't find any linked discussions for this film. Here are the results of a quick search of possibly related threads:
82 6th HOF-Late Spring
Nominated By: Sane I've considered nominating this movie for each of the HoFs I've been a part of and then decided to go with something different but now is the time This is my favourite movie...
33 Spring Breakers
Wondering if anyone has any information on when Spring Breakers is gonna be coming out. Can't find any info anywhere...
2 Spring Movies
The films listed below will be released in America during the month given. March Dreamcatcher: Morgan Freeman, Thomas Jane. Director Lawrence Kasdan. This film is set during a hunting trip...
5 Spring Breakers
Harmony Korine films are like the secret show in the backroom that I have to pay to see even though I know it will be a waste of time. If the screenplay and plot were humans they would be diseased wit...
3 DEADWOOD - Spring, 2019
For those of you who were Deadwood fans, a friend who is in the cast sent me this link mentioning its release this Spring: He's prevented by contract from saying much about it, but it has been lon...

Takoma11 Noriko and Shukichi are incredibly likable characters and the film doesn't rush any of their encounters with each other or the other characters.
READ REVIEW

Citizen Rules I loved the way Ozu filmed not only the actors, especially the lovely Setsuku, but also the way he filmed the scenes...Ozu often gives us a view from afar or a view from a low angle, which makes the people seem so familiar like we're in the room with them.
READ REVIEW