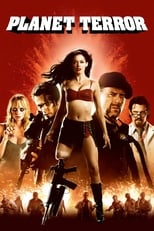 Release: Apr. 6th, 2007
Runtime: 1 hour, 45 minutes
Two doctors find their graveyard shift inundated with townspeople ravaged by sores. Among the wounded is Cherry, a dancer whose leg was ripped from her body. As the invalids quickly become enraged aggressors, Cherry and her ex-boyfriend Wray lead a team of accidental warriors into the night.

2 Planet Terror
Even though I probably should have gone to see this one in the theaters, I finally borrowed Planet Terror from a friend and popped into the old DVD. It was crazy, obscene, funny, confusing, bad, and j...
29 What are your thoughts on Planet Terror?
I think this film is brilliant I watched it again last night and I love it, Im wondering what everyone else thinks of it. If you havent seen it I highly recommend it as it has everything in it, g...
1 Planet of the Apes (1968), Planet of The Apes Remake (2001), or Reboot?
Which Planet of the Apes did you like better? Planet of the Apes (1968) Charlton Heston Planet of The Apes (2001) Mark Wahlberg Rise of the Planet of the Apes (2001) Andy Serkis I kinda li...
11 The Terror
"The Terror is an upcoming anthology television series set to be broadcast on AMC in 2018. - wiki The crew of a Royal Naval expedition searching for the Arctic's treacherous Northwest Passage d...
0 it's a desert science fiction or terror
I think it's a desert, I don't know if it was science fiction or terror or both.There was a character who would throw himself into a truck and the truck would grind him up (gore)It was an image that s...

The Gnat It is a great homage to the grindhouse feature films of the past, and unfortunately will probably spawn more films of that style in hopes of people to build off of any success that the Grindhouse Double Feature might have had.
READ REVIEW

meatwadsprite Original Release : Although originally the movie was shorter and was part of the double feature Grindhouse , the original theatrical release has yet to be released on DVD.
READ REVIEW