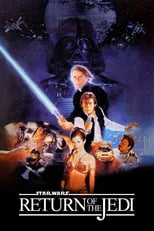 Release: May 25th, 1983
Runtime: 2 hours, 15 minutes
Luke Skywalker leads a mission to rescue his friend Han Solo from the clutches of Jabba the Hutt, while the Emperor seeks to destroy the Rebellion once and for all with a second dreaded Death Star.

BraedenG33 As far as the original trilogy goes, it's the film with the highest highs and the lowest lows of the three, however there are definitely more highs than lows on the whole and is still a movie I love, just more so as a star wars lover than as a film lover.
READ REVIEW

Iroquois Even if it does succeed in that regard, that success doesn't automatically guarantee that the film is a solid film in its own right; as a result, the final film in a trilogy stands a very good chance of being considering the weakest.
READ REVIEW

Omnizoa It's all in the name of wrapping up it's story, but it manages to do so, I think, satisfactorily thanks to honoring the best conventions of the Hero's Journey, to which Star Wars owes the majority of it's story.
READ REVIEW
View All (5)