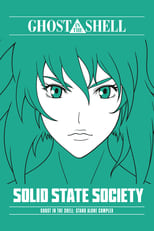 Release: Feb. 23rd, 2007
Runtime: 1 hour, 45 minutes
The story takes place in the year 2034, two years after the events in Ghost in the Shell: S.A.C. 2nd GIG. Female cyborg Major Motoko Kusanagi has left Public Security Section 9, an elite counter-terrorist and anti-crime unit specializing in cyber-warfare, which has expanded to a team of 20 field operatives with Togusa acting as the field lead.

0 Ghost In The Shell : Stand Alone Complex
I am the only one who thinks Ł30 for 2 episodes of Ghost In The Shell: Stand Alone Complex is a bit steep money grabbing heathens. But I suppose it did cost Ł4 Million to make....
151 Ghost In The Shell (2017)
Arriving March 31st 2017. And there's been a massive backlash on social media already. Scarlett Johnasson is in the lead as Motoko Kusanagi... and fans ain't happy one bit that Hollywood has &quot...
2 Ghost In The Shell 2: Innocence
Here's a nice little trailer for Ghost in The Shell 2: Innocence....
3 Beale Reviews Ghost in the Shell
Blade Runner has always been my very favorite sci-fi movie. It has everything: it's noir, it's got a great plot, great acting, great set design and effects. Best of all, though, is that Blade Run...
0 Ghost in the Shell: An attempt at a non-inflammatory dialogue
Disclaimer: This thread is likely a necro and I apologize if it is. I just have a few questions that I find difficult to answer from my perspective. Keep in mind my thoughts pertain to the animated fi...