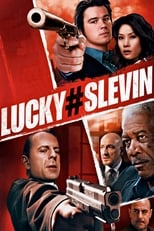 Release: Feb. 24th, 2006
Runtime: 1 hour, 50 minutes
Slevin is mistakenly put in the middle of a personal war between the city’s biggest criminal bosses. Under constant watch, Slevin must try not to get killed by an infamous assassin and come up with an idea of how to get out of his current dilemma. A film with many twists and turns.

30 Lucky Number Slevin = Damn Good
Saw this movie last night and I must say this movie was without a doubt one of the best I've seen in awhile. The movie was funny and witty. At the same time it kind of made you ask what was going to h...
11 Lucy Number Slevin trailer
A case of mistaken identity lands a man (Hartnett) in the middle of a murder being plotted by one of New York City's biggest crime bosses (Kingsley)....
2 The Lucky Ones?
Has anybody here seen this movie? I saw it and I don't know why, but I love it. I just think that the character development in this movie is fantastic, and the road trip aspect of the movie is a...
10 The Lucky One
I know ALL the guys in the forum will definitely be seeing The Lucky One starring Zac Efron this Friday night yeah? LMAO just messin' with y'all :P...
5 Happy-Go-Lucky
Cast Sally Hawkins Eddie Marsan Alexis Zegerman Andrea Riseborough Sameul Roukin Elliot Cowan Nonso Anozie Philip Arditti Sinead Matthews Kate O'Flynn Trailer Theaters: October 10, 2008 ...

NO RATING
TylerDurden99 Josh Hartnett plays the wrong man in the wrong place at the wrong time, as he is mistaken for his friend Nick Fisher, deals with two powerful gangsters (The Boss & The Rabbi), pursued by the police and builds a relationship with Fisher's neighbour, played by Lucy Liu.
READ REVIEW

The Next Big Thing
9th