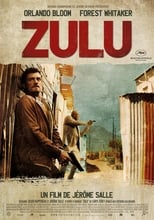 Release: Dec. 4th, 2013
Runtime: 1 hour, 50 minutes
As a child, Ali Neuman narrowly escaped being murdered by Inkhata, a militant political party at war with Nelson Mandela's African National Congress. Only he and his mother survived the carnage of those years. But as with many survivors, the psychological scars remain.

3 Zulu: Rate It!
I've always thought that Zulu is one of the greatest films ever made. Maybe my opinion is slightly bias because I'm a patriotic Englishman (the majority were English not Welsh). How it didn't make the...