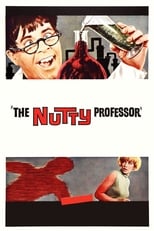 Release: Jun. 4th, 1963
Runtime: 1 hour, 47 minutes
Jerry Lewis directed, co-wrote and starred in this riotously funny movie that set a new standard for screen comedy and inspired the hit remake. Lewis plays a timid, nearsighted chemistry teacher who discovers a magical potion that can transform him into a suave and handsome Romeo. The Jekyll and Hyde game works well enough until the concoction starts to wear off at the most embarrassing times.

11 Nutty Professor II
Greeting fellow movie fans, Has anyone had the chance to see The Nutty Professor II yet? I have heard it is pretty funny, but from the previews I have seen, it looks like a rental. Any comments...
2 The Professor & The Madman
Ladies and gentlemen, the film we have all been waiting for. The creation of the Dictionary. ...
0 The Professor and the Madman
The Professor and the Madman (2019) This is a serious film about a subject which, while fascinating, tends to be dry. It will not appeal to action film lovers, but many will find it interesting ...
3 Professor Matthew McConaughey
I don't know about you guys, but I would LOVE to take a class with Matthew McConaughey teaching. It will be ALRIGHT ALRIGHT ALRIGHT by me ...
1 The professor (La prima notte di quiete ) Alain Delon
Hi, everyone. There is this movoe "The Professor" with Alain Delon that I really want to watch, but can't seam to find anywhear. Pls if someone knows where I can find it to help out and writ...

Takoma11 You would think that the strong theme would either be that (1) Kelp learns to love himself or (2) Kelp learns something from his more confident self, but by the end of the movie I didn't feel that I understood what it was trying to say.
READ REVIEW

Gideon58 Julian takes advantage of his limited time as Buddy until it is suggested that Buddy perform at the prom and Julian be a chaperone, forcing Julian and Buddy to be at the same place at the same time.
READ REVIEW