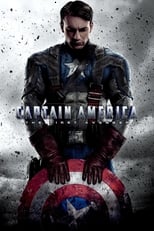 Release: Jul. 22nd, 2011
Runtime: 2 hours, 4 minutes
During World War II, Steve Rogers is a sickly man from Brooklyn who's transformed into super-soldier Captain America to aid in the war effort. Rogers must stop the Red Skull – Adolf Hitler's ruthless head of weaponry, and the leader of an organization that intends to use a mysterious device of untold powers for world domination.

MovieMeditation Captain America does feel more like the actual pages of a comic book thrown onto the screen than Iron Man, for example.
READ REVIEW

BraedenG33 Like I'm totally willing to admit that there are better films on this list, hell I would argue that every film below it except Man of Steel is more well-made than this one, but the fan in me has to have it on the list, if only because of how much I love these characters.
READ REVIEW

Optimus Hayley Atwell surprisingly touching Chris Evans' chest as he emerged from the pod upon turning into Captain America was very much improvised, and the surprise on her face is genuine, as she admitted in interviews she was very taken by Chris' physique and nearly broke character and ruined the take th....
READ REVIEW
View All (10)