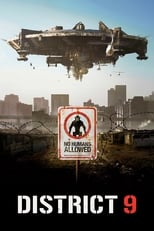 Release: Aug. 5th, 2009
Runtime: 1 hour, 52 minutes
Thirty years ago, aliens arrive on Earth. Not to conquer or give aid, but to find refuge from their dying planet. Separated from humans in a South African area called District 9, the aliens are managed by Multi-National United, which is unconcerned with the aliens' welfare but will do anything to master their advanced technology. When a company field agent contracts a mysterious virus that begins to alter his DNA, there is only one place he can...

We didn't find any linked discussions for this film. Here are the results of a quick search of possibly related threads:
11 Two great movies to see: District B13 and District B13:Ultimatum
This movies are on DVD now but I just saw them to review. If their in the wrong section I apologize. I just saw two really good action movies that I had never heard of it be for. They are called Di...
1 District 9
Looks like a really interesting documentary on Africa ... check out the trailer...
128 District 9
Everyone's seen the trailer that kick-started one very fishy-looking viral campaign, interviewing several humans and an alien in quick succession. That marks many people's first exposure to Neill Blo...
10 District 9 was snubbed, anyone with me?
I honestly felt District 9 was snubbed. The Hurt Locker was a great film, don't get me wrong, and I was very happy it beat out Avatar. But ideally I would have loved to have seen District 9 take the B...
21 Hangover or District 9?
Which movie should I go for tonight, Hangover or District 9?...

Iroquois It's a damned fine thriller that is not without its flaws, but is still several cuts above your average summer film and is well worth watching....
READ REVIEW

Iroquois The film gradually crosses over to being a more conventional film, although still filmed with a very documentarian look and interspersed with occasional news footage or interviews.
READ REVIEW

TheUsualSuspect The first half of the film is told through a documentary style footage, with people talking directly to the camera explaining the backstory of the mothership and basically setting up the rest of the film.
READ REVIEW
View All (11)